This has been a very rewarding project for us all to work on, we hope you enjoy our content.

We made a series of three short documentary-style videos focussing on one of Hohepa's ideas. Head Heart Hands delves into the world at Hohepa, speaking to staff and people they care for to show exactly what they do.

Head: For the first video we sit down with Hohepa's general manager Arnah Trelease to discuss what Hohepa provides and just how they do it. This is created to get a better understanding of Hohepa and what sets it apart from other care services.

Heart: For the second video we meet Shaun spent a day with him talking about his biggest passion, the Great Apes. We went to Orana Park with Shaun to see "his boys" for the first time in a while. Shaun has been an avid supporter of the Great Apes, raising money to donate to the endangered species.

Hands: For the third video we speak with Meshelle Rosvall, Harry Whittam and Kath Graham to discuss life as an employee of Hohepa. We wanted to provide an inside look at just how rewarding it is to work for Hohepa and what their roles are in making Hohepa the best place for caring for people with intellectual disabilities.

"Working at Hohepa is a tremendous privilege and a tremendous responsibility... this is such a fantastic organisation and I really love it."

Hohepa is a pioneer in the disability care sector, it does things differently and keeps the people it cares for at the heart. General manager Arnah Trelease says Hohepa's holistic approach gives her job meaning. "I can’t imagine anywhere else where you could have a role as General Manager where you are in daily contact with people with a disability that you’re supporting and two hours later could be in a board meeting making some decisions."

It's the different thinking or the 'head' that set Hohepa above the rest.

"I'm most excited to see my boys."

Shaun's very passionate about the Great Apes and has been for a long time. He's not only interested in the endangered species, he supports them to. After a number of fundraising events and activities, Shaun raised $600 for Orana Park which marketing, public relations and visitor services manager Nathan Hawke says has helped them do their job.  "You're a good man, aren't you Shaun." We follow Shaun as he visits his boys.

The people are always at the 'heart' of what we do.

"Any work that makes you feel like you make a difference in the world is wonderful work."

There are 180 staff at Hohepa who support about 145 people. Meshelle Rosvall, Harry Whittam and Kath Graham are part of the team and love their jobs. In particular, Mishelle has worked at Hohepa for a number of years, as a support worker she spends time at one of the flats but as a social work student, she is on placement at Hohepa. She couldn't recommend it enough.

These are the 'hands' behind Hohepa.

The people of Hohepa is a mini podcast series dedicated to unraveling the work and lives of the staff working at Hohepa.

They are - the People of Hohepa.

Juliet is a trained nurse with over 30 years of experience. Having only been working for Hohepa since February, she has realised how much she is still learning about nursing and life. She is currently studying anthroposophy and its benefits in ensuring that the intellectually disabled and autistic live a typical life. She is a person of Hohepa

Richard is a trained nurse originally from the Philippines. He has worked for Hohepa for two years and wishes that he had been working there for much longer. Richard works at the Hohepa farm in Haswell with multiple people and has managed to create a special bond with each one of them. He is a person of Hohepa

Happi is a unique staff member of Hohepa. She loves helping others and gets a great sense of fulfilment every time she does a shift with one of the people there. She loves that Hohepa offers the ability to teach people new things and learn at the same time. She is a person of Hohepa.

Harry is a second-year Ara student who works part-time at Hohepa around his lectures. He has learned a lot already from his short time at Hohepa and has managed to apply those lessons into his everyday life. Harry sees the important role he plays in ensuring these people live a typical life.

That someone was Jo Field, who opened up to us to tell us about her experiences with Hohepa and about her daughter Bridget.

Jo Field says her daughter’s biggest wish in life is to make friends. It’s been something 21-year-old Bridget has struggled with in the past, she has communication difficulties and dyspraxia.

But since moving into a flat cared for by Hohepa Canterbury, Bridget has fulfilled her wish.

She’s not only gained friends, but she’s more independent and that’s what she wanted.

“In the beginning of 2018, Bridget told me she wanted to go flatting.

“I was initially shocked saying things like ‘oh my gosh, you won’t cope, you will need me…’ all these silly things - because I’ve protected her for so long. But it was what she wanted so we spent a year looking into it, talking and researching.”

They found out about the services Hohepa provides and visited the facilities. By the end of the year, Bridget was offered a space in a flat with four other young women.

The flat has 24/7 care, but offers the flatmates plenty of independence. There are 33 homes at Hohepa campuses and in the community, all offering different levels of care, catered to who they are caring for.

It was a slow transition for Bridget, for the first few weeks she stayed one night, then two but Jo says she’s very lucky Bridget wanted independence away from home.

She spends six nights a week at Hohepa, but sees Jo every second day and stays over on a Friday.

Until the age of 14, Jo didn’t know if Bridget could comprehend anything. She couldn’t speak or communicate but they discovered she was understanding everything and had taken everything onboard throughout her whole life.

“The big key to the door that opened her communication through a writing technique.”

Bridget was writing, with a teacher guiding her hand - but while looking away the teacher felt Bridget guide her instead.

“The word was botanical after a recent trip there. So that was a wow moment, and from there Bridget was guiding the teachers hand to write words.”

She was tested on reading and answer questions through writing, she knew all her maths.

“She had all this knowledge, but only then discovered the means of getting it across.

“That was like, oh my gosh, because it meant I had someone I could really communicate with and connect with on a deep level.

“She would tell she loved me and I was the best mother in the world. Full on connection.”

While there have been some challenges for both Bridget and Jo to overcome, the team at Hohepa have always worked alongside them.

“On the whole, it is going extremely well. There are always going to be challenges and nothing is going to be perfect but Hohepa have been so willing to sit down around the table and sort out issues, we’ve had a couple of meetings, all discussing how to get things working for Bridget.

“I get emotional at the time, thinking all these people have Bridget's interests at heart.”

For Jo, the last six months have been an “emotional rollercoaster”.

“Now that she’s not with me 24/7, I have time now to think and reflect about my other children.

“I’ve just gone to Perth for 10 days to see my son for the first time, isn’t that fantastic. He’s been in Perth for five years and I’ve never been able to go and visit him.”

“That means for me I can get out of bed, have a shower, eat breakfast, go for a walk - I don’t take those things for granted because I’ve never had them before. Life for me is very different, so to have the ability to do that is huge.”

“She steps up from what she does at home, with the expectations and role models at Hohepa. Some people have said to me they notice Bridget's speech has improved.”

“I save all the special things that she writes… this is what she wrote on Friday to her friends ‘I am so pleased you’re here, I have never had any friends here as I can’t talk but I love that you are here’.”

We wanted to create five short videos Hohepa can use to promote it on social media. These videos highlight different areas of Hohepa that people wouldn't know about.

The first focusses on soup making, a group of people preparing the food for lunchtime.

The second highlights Maori weaving, this is one of the activities people can do to learn cultural skills and techniques of making things.

The third looks into bread making at Hohepa, it follows the process from the team who make it to the team who sell it.

The fourth video focusses on eurythmy at Hohepa, it explains the holistic movement so viewers can understand just what it is.

The final social video highlights one of Hohepa's great facilities - the farm. It shows what it is and what exactly goes on there.

A digital strategy has also been created to help with the content's reach. 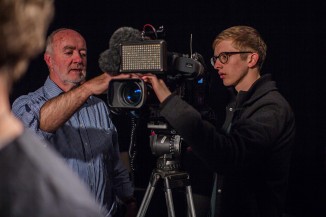 The New Zealand Broadcasting School degree includes a paid placement, which in 95 percent of cases leads to a job.

The rise and fall of Radio Avon