The rescued dogs from Dogwatch are awaiting new and loving homes.

Located at 230 Dyers Road is a Sanctuary just for the four-legged, furry animals we humans call dogs. As you walk up the driveway you will hear the friendly hellos barked out by the dogs waiting for a good home. These abandoned dogs are from four of Christchurch’s pounds and are being taken care of by the loving volunteers and a few paid employees at Dogwatch. The dogs have five acres of land to live on, three acres of which is free space for their twice-daily runs.

Dogwatch started 35 years ago with a love of dogs and two ladies: Estelle Win and Peggy VanBree. The women were worried about pound dogs and decided to set up a foster system in their own homes and grew the organisation from there. Dogwatch’s Manager Pamela Howard became a Foster Parent 33 years ago and has been with the organisation ever since. She says it’s the furry friends that keep her there. “It’s not about playing with the dogs, it’s a passion to ensure these dogs get a second chance. A lot of our dogs have come from really unfortunate backgrounds.”

Last week Dogwatch was housing 32 dogs. Pamela says the numbers do vary from week to week. She says the last week was particularly busy as they had “a litter of nine puppies that were found in a box down in Ashburton abandoned.”

Being totally community funded means Dogwatch are always in need of help. Although it isn't free to adopt one of their dogs, it still isn’t enough to cover costs. Your used clothes, old blankets and spare dollars can all make a difference. Dogwatch have a second-hand Variety Shop located in New Brighton. The shop sells your donated goods to sustain the upkeep of their dogs.

If you have a bit of spare time on your hands, Dogwatch would also be grateful for volunteers.

Pamela says they have “roughly between the shop and the kennels probably about 95 volunteers that come and go. That sounds a lot but they may only do one shift a fortnight. We could desperately do with having more full time employees but that’s a funding issue.”

Most importantly, Dogwatch need people who will take, love and nurture their dogs. Over the years Dogwatch have rehoused thousands of dogs. With every adoption, there is some eligibility criteria you must meet. “The adoption process is not a straightforward process it takes two or three days. When people come in we ask them lots of questions, like what they’re looking for and their suitability for a dog and then we try and do a match up. You can’t just come in and say you want to 'adopt that one', because we want to know the basics,” Pamela explains.

If you’re considering getting a dog, Pamela encourages you to do your research, prepare your home and to visit Dogwatch and therefore save a dog’s life.

To find out more about Dogwatch and their four-legged friends please visit their Facebook page or their website.

In 1982 Estelle Win and Peggy VanBree joined forces to save Christchurch’s dogs. Together, they created Dogwatch, a Sanctuary for dogs who had found themselves at the pound and were in desperate need of a new home. Their initiative has helped save thousands of Canterbury’s dogs - dogs which otherwise wouldn’t have had a chance. Dogwatch receives dogs from four pounds around Canterbury as well as sometimes taking dogs from the West Coast pound.

This year, as the 35th anniversary of Dogwatch rolls over, there will be a celebratory party. A party for dogs (on leashes) and humans (not on leashes) alike. The event will take place on the second of December between 10:30am and 3pm at the Dogwatch premises. The four-and-a-half hour celebration will include games, food, stalls, photo opportunities and more! There will also be a “behind the scenes” tour for anyone wanting to see more of the Adoption Centre.

All money raised from Dogwatch’s birthday celebrations will go towards the general running of the shelter. “Most people are unaware of how much it costs to run a shelter and to care for all the dogs,” Manager, Pamela Howard says. Dogwatch house between 20 to 25 dogs most weeks depending on how many litters they have, but during the earthquakes, they were looking after over 40 dogs. “Still not sure how we managed to do that amount,” Pamela says.

If you are considering getting a dog, this event is for you! Come and see some of Christchurch’s cutest characters on display. As first-time adopter Bridgitte Dunn will tell you, “the dog chooses the person, the person doesn’t choose the dog.” Bridgitte adopted her dog Niko (originally named Cody) from Dogwatch five years ago when he was just two years of age. “It was his mugshot that got us. He was sitting there smiling with his tongue out and we wanted to meet him. So we made an appointment and it stemmed from there,” Bridgitte says.

Bridgitte says Niko and her other dog Ziggy helped her through a rough patch after the earthquakes. Whatever your reason, there could be a four-legged friend ready to vacuum the leftovers off your floor and make sure you get your daily dose of exercise. Bridgitte says her favourite thing about Niko is his personality. “He’s a little bit dopey, he's eccentric at times but he has the biggest heart and he knows when if you’re not well or down or upset,” Bridgitte says.

Dogwatch will also be at numerous other events around Canterbury, so make sure you keep an eye out! Some include; the Christchurch A&P Show in mid November; Riccarton Christmas markets; and Dog’s Day Out at Ferrymead. Dogwatch is also on Web Fair, which is an auction site, until the end of September.

But most importantly, we hope to see you at the party. Entry is free but you will need gold coins inside the event for stalls and games.  So write it in your diary, gather your loved ones and bring your furry friends. 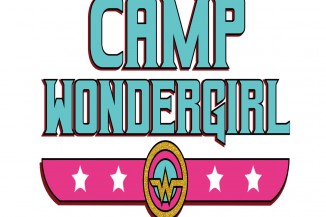 The purpose of this campaign was to spread awareness of the Camp Wondergirl brand and give it content for social media and marketing.